The Choral Society “Armonia” of Preveza, Greece would like to invite you to the 33rd International Choral Festival which will take place from 2 to 5 of July 2015 in the town of Preveza. 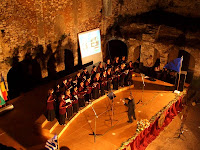 Character of the festival

The International Choral Festival of Preveza counts 32 interesting and exciting years of high quality choral music, challenged by excellent choirs which are continuously raising its standards and a great variety of intercultural experiences with participants from all over the world.

The Festival includes numerous concerts given at idyllic locations of the area like the seaside fortress of Preveza and the historic Ancient Auditorium of Nicopolis “Odeon”. The other part of the Festival is the prestigious competition for which through the years we have been honoured to have internationally been acclaimed experts of the field overseas.

For visiting choirs, Preveza provides an opportunity not only to perform; but also to experience some of the world’s best choral music, soak up the atmosphere and enjoy the mingling, singing and fun, and explore the picturesque city of Preveza and its surrounds.